Honored for their superior teaching, faculty members are nominated by present and former students and colleagues and selected by a committee of alumni, students, and faculty. The Department of Materials Science and Engineering congratulates John Horack, Senior Associate Dean of the College of Engineering.

Neil A. Armstrong Chair, Department of Mechanical and Aerospace Engineering
College of Engineering 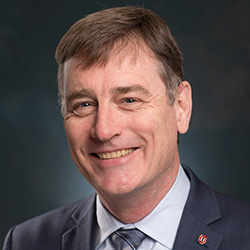 Walk into John Horack’s engineering classroom and one of the first things you’ll notice is the words he writes on the board each day: “All are welcome.” As a student explains, “He does this to remind us that he wants us all to feel invited and that we all have a friend in him.”

Indeed, that’s a mantra Horack lives in the classroom. An undergraduate woman of color describes a time that one of her classmates—also a woman of color—had difficulty expressing her thoughts about something because of cultural differences. “She stopped in the middle of her statement and said she did not want to go on because she thought Dr. Horack wouldn’t be able to understand with him being a white man… He assured her he wanted to hear what she had to say because he wanted to understand. After she shared, he commented on how brave she was for sharing and thanked her for giving him a new perspective.” Horack earned students’ respect that day, as they saw him genuinely interested in learning from his students and being unafraid to delve into subjects that might feel uncomfortable.

In his class on leadership, Horack models leadership for his students by being a leader in the classroom, including sharing his own insecurities and flaws. “It was really cool to have a professor who wasn’t afraid to show his flaws and admit his mistakes, because it taught us so much about leadership and gave us insight into Dr. Horack as a person,” writes a student. “It showed us that he is a human, which is always a great way to build connection and trust, which is something a leader must know how to do.”

Horack holds a PhD and master’s degree in astrophysics from the University of Alabama, Huntsville, and a bachelor of science in physics and astronomy from Northwestern University. He is an FAA-licensed flight instructor, with commercial and instrument pilot ratings.

The Ohio State University. www.osu.edu/universityawards/2019/distinguished-teaching-2019. Published and accessed May 6, 2019.