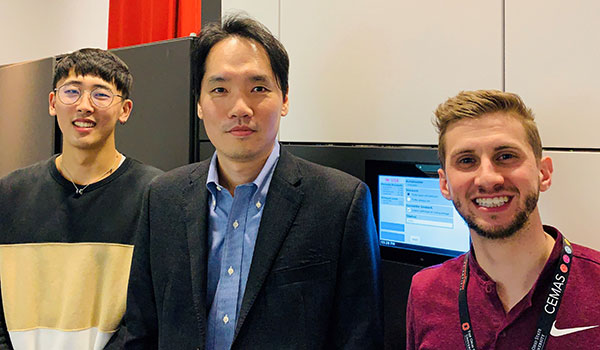 Jinwoo Hwang, PhD, and his team at CEMAS are credited with developing an electron probe that directly measures the temperature of materials to explain heat transport between materials.

One of the greatest benefits of hosting a world-class microscopy center is the brilliant talent behind the lenses. The Center for Electron Microscopy and Analysis (CEMAS) will enjoy the study of materials in a manner that will directly probe the cause of thermal interface resistance (TIR) within materials. Jinwoo Hwang, PhD, Assistant Professor, Materials Science and Engineering, will be managing this one-of-a-kind research beginning April 1 and running through March 2024 thanks to a NSF CAREER Award granted.

The game changer created by Dr. Hwang and his team

Dr. Hwang and team have developed a novel technique that uses a small electron probe to directly measure the temperature of materials with atomic-scale precision. Their progressive method allows them to identify the atomic structure and thermal properties of interfaces on a level never before seen, which is critical to understanding heat transport in materials. In referencing Hwang’s discoveries; scientists, engineers and manufacturers will be armed with improved materials design, leading to increased stability and performance. Electronic, photonic, and energy-harvesting materials are especially sensitive to TIR.

While TIR is commonly known for most materials and accepted with trepidation, Dr. Hwang and his team at CEMAS will use the NSF funding to directly probe TIR and provide theory explaining variant TIR among material interfaces. His proposal, entitled "Novel Debye Waller Thermometry of Oxide Interfaces for Reducing Thermal Interface Resistance”, is based on quantifying Debye-Waller factor, the attenuation of scattered electron intensity due to thermal vibration, spatially resolved at the atomic scale, using high-angle annular dark field signal in scanning transmission electron microscopy that is highly sensitive to thermal vibration.

Measuring TIR and its effect on thermal transport

It is critical to understand heat transport through various interfaces within the material to control thermal conduction. However, it is often very challenging to identify the exact origin of TIR, since there has yet to be a method of measuring it directly at the interface. The challenge resides in the unknown, and Jinwoo is equipped to identify the exact structure of an interface and its effects on the thermal transport process using the electron probe method he and his team developed. The NSF CAREER Award will allow Dr. Hwang and his team to verify existing theories and simulation results that reduce TIR and provide new material design rules outlining how to control TIR by modifying the interface structure and composition, which will deliver a transformative impact on the thermal engineering of materials.

We congratulate Jinwoo Hwang, PhD, for being awarded the NSF CAREER award and for advancing the field of materials science through world-class research efforts.