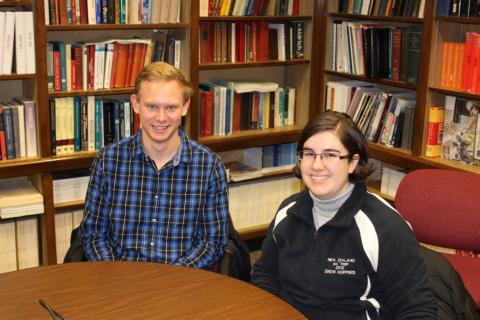 Paul Lacher, an MSE undergraduate at Ohio State, caught up with Lara Cullinane, a student at the University of Queensland in Brisbane, Australia. Lacher will be taking Cullinane’s spot at Queensland for a semester, while Cullinane enjoys some Buckeye hospitality.

Students cross paths every day at The Ohio State University, but the Department of Materials Science and Engineering (MSE) was was the scene of a somewhat unique exchange.

Paul Lacher, an MSE undergraduate at Ohio State, caught up with Lara Cullinane, a student at the University of Queensland in Brisbane, Australia. Lacher will be taking Cullinane’s spot at Queensland for a semester, while Cullinane enjoys some Buckeye hospitality.

While they come from different hemispheres, they share a passion for science and a desire to step outside of their comfort zones.

“I’m looking forward to seeing a new culture – new places, new people – and hopefully learn about myself in the process,” said Lacher, who’s also majoring in art at Ohio State.

“I like to set a challenge for myself, and I’ve always wanted to study abroad,” Cullinane said. “I was so happy when this reciprocal opportunity opened up.”

The exchange program between Ohio State and the University of Queensland is funded by QIC Global Infrastructure through Campus Parc, thanks to a $150,000 investment which supports scholarships for student exchanges and internships in the areas of engineering and finance.

While he’ll miss spring, “It’s hard to say ‘no’ to going to Australia for free,” joked Lacher, who plans to stay in Australia as long as his visa allows.

Lacher landed in materials science in part because of an interest in chemistry and a desire to “engineer something on a fundamental level, to create new and better materials for other engineers to apply to their work.” He’d like to start his career at General Electric (GE), where he’s already had some internship experiences.

Cullinane was involved in a space-station design competition during high school, focusing on the materials component. “You can apply it to a lot of different areas,” which appealed to her. She’d like to narrow her area of specialization while studying in Columbus.

The pair had advice for their counterparts. He’d like for Cullinane to “find the uneexpected things on campus,” like the Billy Ireland Cartoon Library and Museum, and to “explore opportunities that you don’t normally have,” including everything Columbus has to offer.

Culinane suggested Lacher get outside and “go farther afield. Get outside of Brisbane and scuba dive, go to the beaches.” She concluded with an all-around excellent piece of advice for an intrepid traveler: “Don’t get stung by a jellyfish.”

Ohio State and the University of Queensland are members of Universitas 21, the leading global network of research-intensive universities, working together to foster global citizenship and institutional innovation through research-inspired teaching and learning and student mobility.

Welcome to the WE program!
More News