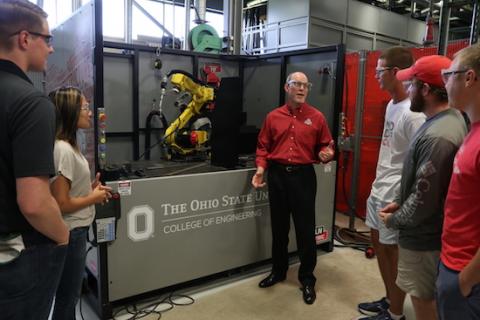 Doug Fairchild ’80, ’82, ’95 talks to welding engineering students during a recent trip to campus.

“There’s a kid out there, going to an inner city high school, who’s smart and willing to work really hard. I want to give him or her a chance,” said Doug Fairchild (’80, ’82, ’95, welding engineering), who believes in paying forward.

Yet when his wife, Jamie (’81, mechanical engineering), first brought up the idea of establishing a scholarship endowment, Doug was skeptical. “My limited understanding of the world was that someone establishes a scholarship by writing a check for a million dollars and that’s not me. I can’t do that.”

But Doug agreed to look into it and together the two Buckeye engineers made a generous gift to endow the Douglas and Jamie Fairchild Scholarship Fund. It will enable more undergraduates to earn welding engineering degrees.

“We figured out a way to make it a reality. Doing it over time with a payment plan and taking advantage of the ExxonMobil match were the key steps,” Doug said. “And after some reflection, I realized it’s the right thing to do. I have to create an opportunity just like the one I received.”

The fact that ExxonMobil, the company Doug has worked for since 1982, gives three dollars for every dollar donated by their employees was instrumental in helping the Fairchilds achieve their giving goal.

“ExxonMobil is very proud of their support to academic institutions,” he explained. “They call themselves a technology-driven company and demonstrate it various ways. It’s a great service to higher education.”

For Doug, who grew up one mile north of The Ohio State University campus and could hear the marching band practice from his neighborhood, deciding to give back to his alma mater was as easy as making the decision to attend it.

“So many people in my family attended Ohio State,” he explained. “I always knew that’s where I should go to school, but I didn’t have the means to pay for it. At the time I finished high school, neither I nor my family could afford to pay for my college.”

“Ohio State bet on me. They gave me a chance and I took that chance and ran with it. I’ve done very well with my career, and when I look back at my academic training, I see what a key component it was to my success,” he said. “I’ll always be appreciative of Ohio State for giving me the opportunity.”

Now, as ExxonMobil’s campus ambassador for Ohio State, the three-time alum returns to campus each year to share his professional experiences with materials science and welding engineering students. Ohio State bet on me. They gave me a chance and I took that chance and ran with it.

“I’m talking in some of the same rooms that I took classes in,” he said. “It’s great to be able to say, ‘I sat in that chair 35 years ago. Let me tell you about what my career has been like, what I’ve been able to work on.’”

Doug is thrilled that he can now pay forward and give other hardworking kids the opportunity to learn in that same chair.

Welcome to the WE program!
More News